My next book, The Faith Machine

A psychic espionage story of factions; The Chinese bureau of ghostbusting vs. a Liberian warlord vs. the last Soviet parapsychologists vs. a mercenary army with weaponized psychic corpses vs. North Korea vs. an American anti-Gnostic cult vs. The Department of Health and Human Services vs. Jesus.

This sub-genre has few footprints in prose. As far as I can tell it’s just Declare and Three Days to Never from Powers and the Necroscope series by Lumney. There’s far more speculative spy stuff in comics; The Invisibles, Planetary, Secret Avengers, League of Extraordinary Gentlemen, Nick Fury and on and on.

New tools. I’m trying the Snowflake method for outlining, hopefully that will keep me from having to rewrite the last half of this novel between drafts, and the Scrivener word processor, which I can already tell will make moving scenes around far easier than it was in MS Word.

Making the climb up from the cliff of notes to outline country is tough, because notes and research is so damn fun: 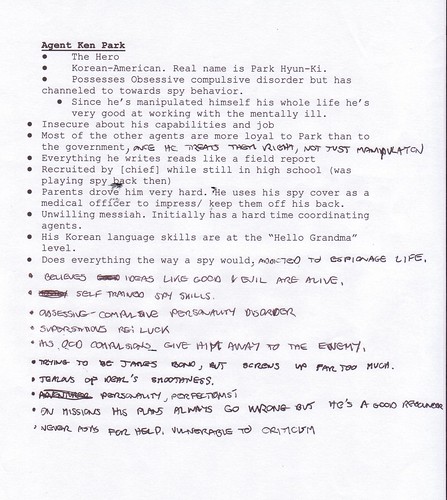