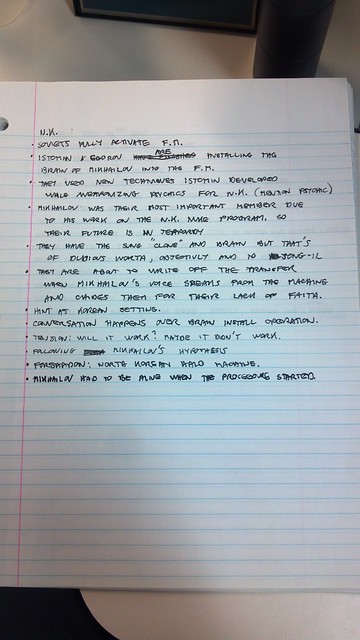 Here’s page one of The Faith Machine outline.

The first act is pretty solid and the second act is coming together. I figure the third act won’t take too long to outline since I’ve had most of it in my head since day one but I’ve said that before.

Last weekend was spent transcribing into Google Docs. I’ve been walking around with 40 scenes of outline and about 10 more pages of miscellaneous notes, putting far too much faith in my ability to hold onto things.

I thought I had a solid outline for Picking Up the Ghost but it broke down towards the middle and I didn’t get any feedback on it. I’ll be running this outline by some people before the actual writing starts and hopefully I won’t have to rewrite the second half of this book.

This has also helped juxtapose and manipulate ideas before they gel. Originally I had five golden rings as MacGuffins but not only are rings played out but they were supposed to be relics of the Soviet Union and small and shiny doesn’t evoke the USSR so I changed them to big clunky chairs. This demobilization had all kinds of implications for the cast and plot which I would have been reluctant to do if I was 40 pages into the prose. But in an outline it just took a few hours to adjust.