The Faith Machine Milestone 2, the Faithening 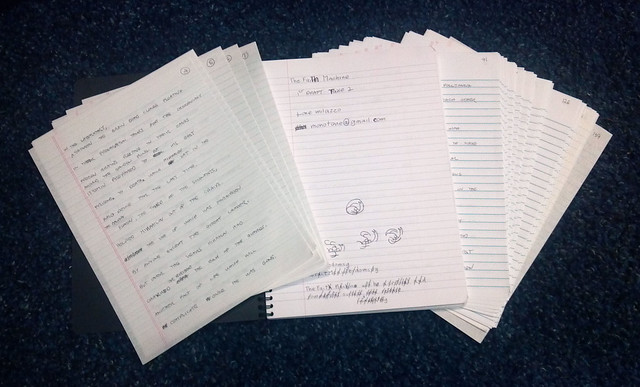 You’re looking at the first three chapters and prolog; 1439 pages at approximately 100 words per page. Handwritten because at the early stages of a story being one a computer is too distracting. If this were to go to print now it’d be about 56 pages in a book. But it won’t be printed. It’s not worthy. Because inside these pages there’s a meandering storyline that needs tightening, sentences that need restructuring, paragraphs that need tightening and spelling that needs some serious correcting.

But there’s some good stuff too. For one there’s a lot of action. Picking Up the Ghost was criticized as a slow starter. That won’t happen again. Also an ensemble lets me play with a diverse series of challenges and I’ve already started thinking about writing a series of short stories featuring members of the supporting cast.

In the meantime I’m going to take the weekend off to let the pages settle. And then on to the second draft, my favorite draft of all.