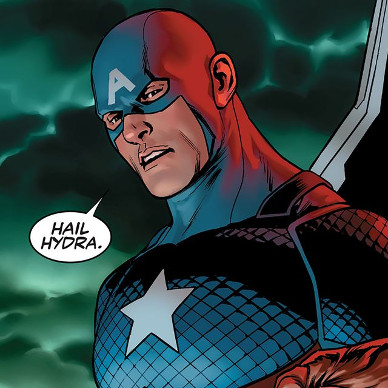 In a medium where death is temporary, semantic satiation has drained ‘justice’ of all meaning, and heroes fight each other as often as the villains, these two words set fandom on fire. Captain America a Hydra sleeper agent caused great wailing and gnashing of teeth. (Rewriting the past is never popular.)

The outrage washed right past me. Taking comics seriously, that’s kid stuff. (More like, forty-year-old man-child stuff.) On the list of things worth my outrage, what a corporate entity decides to do with it’s intellectual property is near the bottom. Furthermore, Captain America’s part of the G.I Generation. And this swing to the right’s just playing to type.

Take my dad; A man who benefited form the New Deal as a kid, and voted to disassemble the social safety net for everyone else every chance he got. He served as a Navy minesweeper in World War II, yet thought Hitler had the right idea. Decried discrimination against Italians everyplace he imagined it, and wouldn’t visit a doctor with a Jewish name. He’d of fit right in with what’s become of so much of the G.I. Generation, the Tea Parties and the Trump Train.

So why shouldn’t Steve Rodgers be a Nazi in all but name? We have our own Captain America.