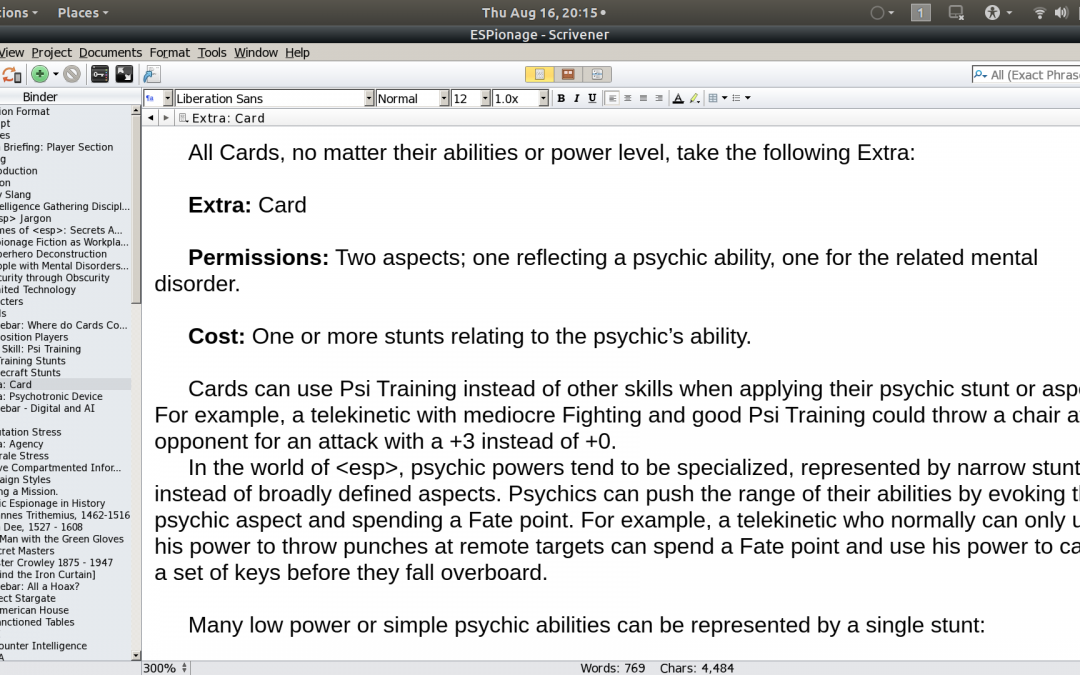 I’ve been busy working on a world book for the Fate Core role-playing game system. It’s turned into an interesting exercise in world-building. In the process, I accidentally created a series bible.

ESPionage is based on The Faith Machine, my psychic espionage thriller. This body of work consists of a novel, two novel outlines, half a dozen short stories in various stages of completion, and a comic book pitch, not to mention a notebook full of incomplete ideas. I had a lot to draw on. Spilling it out on the page was easy. Organizing and filling that information’s given me a new perspective in the material.

For example; early on I based the spy lingo for psychic phenomena on poker and card expressions. But I hadn’t got further than ‘Card’ means psychic. The glossary of a game book can’t stop at one word. That’s not even a sidebar. So then…a team of Cards, that’s a Hand, clearly. And an agency that operates multiple teams, that’s a Table. Many nations will have more than one Table, like a casino or House. Then the entire psychic espionage community at large, that’s the Strip.

Organization’s the bomb, yo.

And not just details. This goes for themes too. I received a piece of advice at the Writers’ Coffeehouse; At the beginning of a novel make a list of six things the story is, and six things it’s not. This isn’t for the audience. It’s for the author. But it made a good introduction for the game book:

I’m closing in on a first draft. If everything goes right, I’ll run it online and make a YouTube channel out of it.